Home » What is Qigong 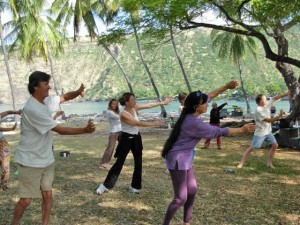 Qigong is an ancient Chinese health care system that integrates physical postures, breathing techniques and focused intention. The word Qigong (Chi Kung) is made up of two Chinese words. Qi is pronounced chee and is usually translated to mean the life force or vital-energy that flows through all things in the universe.

Zhineng Qigong was developed in the early 1980s by Professor Pang Ming, MD at a time when the Chinese government encouraged the popularization of Qigong in an effort to reduce medical costs and maintain good health amongst the Chinese population. Its exercises are relatively easy to learn and very effective and his methods spread rapidly throughout China.

Practitioners learn and practice a series of movements that make up a particular “method” or exercise. The daily practice of these movements increases vital energy and unblocks the energy channels of the body to bring about a free flow of Qi. Improved health is the outcome, since most illness is associated with insufficient Qi and/or blockages in its flow. 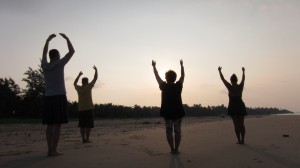 Zhineng Qigong uses both body and mind to enhance health and heal illness. A series of movements and postures are carried out in a meditative state of deep relaxation. Each series is part of a systematic method of practice that an individual can choose to follow more or less intensively, to cure illness or simply to remain in optimal health. 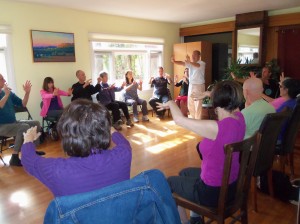 While the first and most obvious benefits of Zhineng Qigong are an improvement in physical health and a sense of well being, its practice also has a powerful effect on the mental faculties. Many of its practitioners not only are cured of their illnesses and attain a much better level of physical health but also develop their mental faculties and can use them to benefit both themselves and others. Some become powerful healers, many are able to better achieve in their chosen field.

Zhineng Qigong can also be described as a form of moving meditation that lays equal emphasis on the body and the mind.  It involves both dynamic and static practices, i.e., both moving and still methods. It consists of an integrated series of methods and exercises that together work on the whole body and organs as well as the mind/spirit (Shen). Depending on an individual’s particular health problems it is possible to focus on particular exercises or parts of a method.

“Modern science understands human beings from the outside, as a subject, but qigong understands people from the inside. In Chinese we have a saying: ‘zhi nei er da wai’, which means ‘if you really understand inside you will also understand outside (the universe and all its information)’. This is because our mind contains all the information of the universe. Through qigong we can improve ourselves to be healthier, kinder and more free. We can use information to help other humans and to make our own life more beautiful.” – Master Jianshe Liu

The origins of qigong go back thousands of years with many styles and forms emerging and developing over time.  Some qigong forms focus on physical health while others more on spiritual development.

In 1979 an important  new qigong was created by Dr. Pang He Ming. This new form was called Zhineng Qigong, meaning wisdom, a particular practice for developing wisdom and abilities but most people have been attracted to it for its profound health benefits.  In 1997 the China State Sport General Administration published  a book on 21 different styles of qigong and  rated  Zhineng  Qigong as most effective ; and again in 1998 the same organization evaluated qigong styles rating Zhineng Qigong as an extremely effective practice for improving health .

The founder Dr. Pang He Ming was a physician of both western and Chinese medicine. He studied qigong with nineteen different Kongfu Grandmasters and developed Zhineng Qigong as a result of his search for the most powerful way to help patients heal. He founded the HuaXia Qigong Center in 1988, the largest medicineless hospital that worked with over 300,000 patients with a 95% effective rate during the ten years it was open. Dr. Pang has written many books on Zhineng Qigong and also introduced the Hun Yuan Qi theories to heal patients and the use of a qifield to teach qigong in order to help patients more effectively.

Zhineng Qigong could be described as a form of moving meditation that engages our awareness of the body, mind and qifield. It involves both moving and still practices that work on the whole body and organs as well as the mind/spirit (shen). The benefits of cultivation far exceed our ideas of health and well being effecting all aspects of our life.

You are Love, I am Love, All is Love. You are Blue Sky, I am Blue sky, All is Blue Sky. You are Pure Qi, I am Pure Qi, All is Pure Qi!
~ Liu Jianshe, Hexianju Qigong Centre, Hainan, China